Approximately 10-15% of US adults suffer from chronic insomnia. Sleeping pills are not a solution for chronic insomnia because you can’t keep taking them forever. But during the process of treating the root causes of insomnia, they can be useful to get some sleep every once in a while. In this article I’d like to share with you a natural, and I believe safer, alternative to the most commonly used sedative-hypnotics in the United States, such as the benzodiazepines and nonbenzodiazepine GABA agonists (zolpidem, zaleplon, and eszopiclone): Amanita muscaria (fly agaric mushroom).

Amanita muscaria is a powerful sedative. This Sleep Mushroom may be particularly beneficial for people with insomnia, to those who are hooked on sleeping pills, and to sufferers of anxiety, depression, or chronic pain.

The most common sleeping pills work by affecting the “sleep receptor,” in the brain.

This receptor is normally only activated by an inhibitory neurotransmitter our body naturally produces: γ-aminobutyric acid, also known as GABA (the sleep neurotransmitter).

GABA produced in cells within our brains cause an inhibition by acting at GABAA receptors (GABAA-benzodiazepine receptor complex).

In people with insomnia, this doesn’t always work. They just can’t seem to make enough GABA to “turn on” sleep.

Could it be possible to activate the sleep receptor in a different way?

Can you just take a GABA supplement?

Unfortunately, using GABA as a nutritional supplement doesn’t work since GABA does not cross the blood-brain barrier, meaning it cannot get from your gut to the brain.

Sleeping pills, such as zolpidem, flurazepam, triazolam, eszopiclone, estazolam, temazepam, and zaleplon, exert their effects by binding to locations on the sleep receptor, indirectly activating it. However, because these don’t work exactly the same as GABA, they have various side effects.

If there was only a substance we could ingest that mimics GABA itself, and therefore most closely resemble natural sleep in their effect, drug companies could be raking millions selling the perfect sleep aid…

No need. Thankfully, Mother Nature already took care of that! It is called muscimol and it is present in the Amanita muscaria mushroom.

In fact, muscimol, a GABA reuptake inhibitor, was used in the development of a range of GABAergic agents including tiagabine (Gabitril), nipecotic acid, Gaboxadol, and 4-PIOL, which have analgesic, sedative, and anticonvulsant effects.

One of the active ingredients in this mushroom is called muscimol. It works in a very similar manner to the most commonly prescribed sleeping pills, benzodiazepines, but without the side effects.

In doses lower than 10-15 mg, muscimol is not hallucinogenic.

In low doses, the effects of the Fly Agaric mushroom tend to induce sedative, euphoric, and opium-like effects, conductive to relaxation and sleep.

Some people report that the mushroom healed their depression and anxiety.

Amanita muscaria can also help people who are addicted to benzodiazepine and other medications.

When taken before going to sleep, the Fly Agaric mushroom may not only induce sleepiness, but also initiate pleasurable, vivid, and sometimes lucid dreams, often involving flying.

How to Use Amanita muscaria to Enhance Sleep?

Based on reports, microdosing Amanita seems to be highly useful for improving sleep.

People report getting deeper and longer sleep consistently with zero side effects. One person summarized a month-long microdosing experiment: “I was finally able to stop taking Lunesta after being on it for a year.”

My own experiments using Fitbit sleep tracking while microdosing Amanita muscaria have confirmed that. I spend less time awake during the night. It’s also much easier to wake up in the morning and I tend to wake up earlier than I normally do and with less tiredness (even when I sleep less than usual).

These stats exemplify my sleep on a microdose of Amanita muscaria: 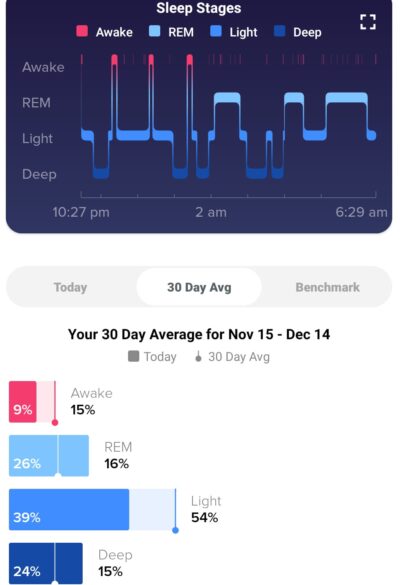 The wake time is also much lower (9% versus my average 15%). Amanita contains mannitol and hence is slightly diuretic hence the awakenings, I will try to drink less water in the evening and believe my sleep score will be even higher.

And my sleep score that night… an amazing 92%! Previously, I was never able to enter the 90’s.

Others have reported similar results. One person told me that they get a slightly deeper sleep, but also that their sleep-maintenance insomnia is gone while using the mush, comparable with the effects of Ambien.

Someone else said that they were able to break an addiction to Lunesta since beginning to microdose the shroom.

One important thing to keep in mind with Amanita (as well as with sleeping pills), I noticed that if I took my potion right before bed like at 22:30, I would still be sleepy until late next morning or noon. So it seems to be better to take it at least 2-3 hours before bedtime.

Based on my experience, the mushroom may make it easier (and faster) to fall asleep and make sleep deeper even when taken before a daytime nap though the sleep may be light and feel as if one is awake the whole time (paradoxical insomnia).

How to Ingest Amanita muscaria?

As with many other powerful herbal remedies, you should be careful with the dosages.

For people who are looking to improve their sleep, microdosing is sufficient and there is no need to take large doses.

I recommend making a tea by simmering 15 grams of Amanita muscaria with 1-2 cups of water. After 20-30 minutes, strain, and drink with lemon juice. Not the whole thing! Just an eighth to a quarter of a teaspoon (or no more than 1-2 grams) of the resulting extract is the first dose. Then, if needed, increase the dose very gradually. For example, you may take a quarter teaspoon the first day, then a half of a teaspoon the next, a whole teaspoon the third day and so on and so forth until you find the dose that works best for you.

You may store the resulting potion in a sterile container and in the refrigerator for up to one week (or in the freezer for even longer).

Warning: When microdosed, Amanita muscaria does not seem to be dangerous, nor does it cause any significant side effects. However, in high doses, it may be poisonous and toxic. Do not combine this mushroom with alcohol or sleeping pills, including benzodiazepines or barbiturates. Actually, do not consume them at all before consulting with your physician, especially if you suffer from any health conditions or are taking medications.