Do you dream too much? Are your dreams intense or nightmarish?

Or perhaps you don’t remember any dreams at all? Or don’t understand your dreams as much as you would like to?

Or would you like to explore the dream world consciously in lucid dreams?

Or to rid yourself of the fear of death by experiencing your spirit separate from the body by having out-of-body experiences, also known as astral projection?

Or, perhaps you are looking to awaken from the collective daydream of illusion most of us waste our entire lives in…

Whatever your goal may be, if it concerns dreams and altered states of consciousness, I’m available to support you and help you attain it.

Get in touch with me TODAY.

Dreams, or sleep mentation, consist of the perceptions, thoughts and emotions we experience during sleep.

Dreams mostly occur during Rapid Eye Movement (REM) sleep, but they also occur during deep sleep and even when we are awake.

Wait, what?! When we are awake? Oh… you must be referring to “daydreaming!”

Daydreams are one type of dreams we experience during the day, and when I say daydreaming I’m referring to the current of (often) unconscious thoughts that constantly fill our minds, like clouds on an Autumn day.

Only a truly awakened individual (or “Buddha“) can say that the skies of his consciousness are bright, clear of clouds. He lives in an eternal “summer…”

But there is an additional type of dream that all living creatures experience, even the awakened while still alive. The only way to wake up from that dream is to die in the awakened state.

What is the nature of this dream exactly?

It’s not easy to explain, but Cognitive Psychology does a good job at that. Basically, dreams are experiences created by our brains.

(Warning: Do not keep reading this if you suffer from psychosis, or an inability of differentiating dreams from reality. Skip to “States of Consciousness” below, please.)

Where does that place our perceptions though?

Do colors really exist? How about music? Speech? Sounds? Tastes? Scents? Heck, are there even objects outside of us? Are we objects?

The answer is NO.

Colors are light waves/particles in different frequencies, which our brains interpret as different colors.

Sounds, including music and speech, are in reality vibrations of the particles of air around our ears.

Tastes and scents are dreams created in response to chemicals in the food we eat, and the world around us.

And objects? Here we have to turn to modern Physics. (Disclosure: I’m not a physicist. The information provided below is based on my limited understanding of a highly difficult theoretical topic, which very few people in the world thoroughly understand.)

Objects are mostly made of nothingness. All matter is made of energy… If that doesn’t seem right to you, then consider this:

All matter is made out of atoms, which, according to Wikipedia, are the “smallest constituent unit of ordinary matter that has the properties of a chemical element.” Atoms are made of various subatomic particles, namely protons, neutrons, and electrons. In the center we have the nucleus, which is composed of protons and neutrons, and surrounding it is an electron “cloud.”

Now, even though almost all of the mass of an atom is located in the nucleus, the dimensions of the nucleus are much, MUCH smaller than the diameter of the atom itself.

So is the electron cloud occupying the rest of the space? No. Electrons are much smaller than protons and neutrons. In fact, more than 99% of the size of the atom is empty space, as far as scientists know.

How about that less than 1% though? Could that be physical matter?

Nope… Protons and neutrons are made of quarks and gluons, and even more empty space. No one knows what electrons are made of perhaps because they are so incredibly tiny (at least 1836 times smaller than protons.) In fact, some physicists assume that electrons are non-spatial point particles, with a zero radius. Electrons also have an electrical charge, which makes some people believe they are actually energy “particles,” even waves, rather than matter.

Quarks, like electrons, are considered by some to be point-like entities, with zero size. They also have an electric charge like electrons. Gluons are similar to photons (or light particles).

And us? Our physical bodies are a dream too. We’re also made of mostly nothingness.

Our bodies, like all matter, are made of more than 99% empty space as well as charged particles/waves of energy…

When you touch another body, there can never be a real physical connection because the electrons repel each other, but a sensation of pressure is still created by the brain, making us feel as if we’re touching. But touch, like our other senses, is a dream, or rather our brain’s construction of the external environment which in reality is far different than the way we perceive it to be.

We’re all just “God’s” dreams, or dreams arising in the universal consciousness…

Our basic state of consciousness is the normal waking state.

Whenever we’re not awake in the normal sense of the word, we are said to be experiencing an altered state of consciousness.

Different states of consciousness our characterized by specific neural oscillations, or brain waves.

Neural oscillations can be measured by electroencephalography (EEG).

Beta waves have a frequency range of between 12.5 and 30 Hz (cycles per second).

Alpha waves have a frequency range of between 8 and 12 Hz (cycles per second).

Theta waves have a frequency range of between 4 and 7 Hz (cycles per second).

State of consciousness: Drowsiness / Hypnosis / Sleep (but not during the deepest stages of sleep). Psychedelic states of consciousness may give rise both to delta and theta waves.

Delta waves have a frequency range of between 0.5 and 4 Hz (cycles per second).

Gamma waves have a frequency range of between 25 and 100 Hz (cycles per second).

Brain Waves and States of Consciousness 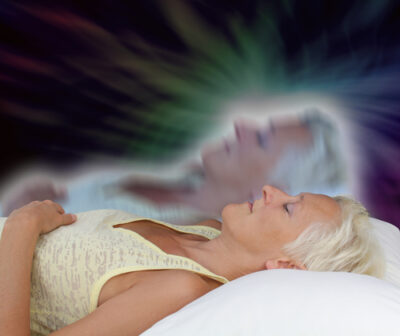 The process of astral projection involves first getting into alpha waves by entering a deep state of relaxation. When the body actually falls asleep with the mind awake (the trance state) supposedly involves theta waves. Specifically, based on the research of Robert A. Monroe in his book Journeys Out of the Body, out of body experiences seem to occur in a very narrow frequency band of 4-5 Hz (slow theta waves), with nothing at all above 10 cycles per second (alpha waves of relaxation).

To summarize, these are the most known brain waves patterns and the state of consciousness most clearly associated with them.

Notice how the faster the waves are, the more awake we are. It seems that the faster our brain works, the more real things seem and the easier it becomes to be conscious and aware.