As a sleep consultant, I speak a lot with my clients about the importance of incorporating meditation into their daily schedule.

However, it’s important to remember that meditation is not a goal in itself.

It is merely a means to an end.

And that end is to reach and constantly maintain the state of mind known as:

What exactly is this state of mind?

How can it help us to attain better sleep?

And finally, what are some of the methods by which we can reach this state?

These are the questions I’m going to cover in this short post. 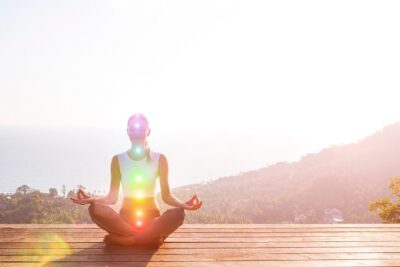 Generally speaking, there are two modes our mind can take at any given moment:

Most, if not all, of our time is spent in the active mode.

We’re constantly thinking about what is happening to us, what had happened in the past and what we believe may happen in the future.

This thinking goes on continuously.

Sometimes we do it purposefully, which is the only time we should be using the active state of mind. If we really need to plan something (e.g., a business meeting) or learn a lesson from something that happened in the past (e.g., a failure we wouldn’t want to repeat), we ought to make use of this very useful ability of the mind.

The problem begins when we do it without intending to do so. It just happens of its own accord whether we like it or not. We’re not even aware that it’s happening most of the time. We might be driving somewhere only to realize upon arriving to our destination that we haven’t noticed the way since we were so absorbed in our thoughts.

Even when we sleep, this habit continues in the form of dreams. Only deep sleep gives the mind the rest it needs so much.

Needless to say, this constant thinking causes us to lose a lot of energy, energy which is replenished when we sleep. The more time we spend in the active state of mind, the more sleep we need at night.

Meditation is the practice of entering the passive mode, which is why it in Taoism it is called wu wei (non-doing). It’s an action that is actually a non-action. It’s an activity which leads to passivity.

Passive Mind – “Why Would I Want That?”

You may be wondering.

Indeed in our highly competitive, ego-driven society, passivity is not a quality most of us would want to cultivate.

On the contrary, we’re constantly encouraged to be active, involved, dynamic, industrious.

But don’t let the word “passive” confuse you.

The fact that your mind is passive doesn’t mean that you’re a passive person, or that your behavior is passive. On the contrary, the more you’re distracted with unconscious, unintentional thoughts, the less energy you will have for directed, purposeful thoughts, and thus the less effective you will be in your activities.

But more importantly, we live in the here-now. Our experience always takes place here, now.

We’re only given one moment at a time. And what do we do we that present? We constantly think about the past and the future.

We never live the in the future, so why should we constantly plan it, never ever reaching it?

There is no future as an experience. It is merely a concept useful for planning and learning. But most of the time we ought to be enjoying the present moment instead of wasting it on planning a future that will never come.

It’s enough to just take care of the present moment in order to make sure that all the coming moments will be great as well.

The Third State of Mind

It is sometimes referred to as:

This state of mind transcends the duality of the normal mind; it is neither active nor passive.

We’re still attentive as in the passive mode, but there is nothing to be attentive to, except for the attention itself. The witness in essence is witnesses itself.

The third state has two very serious effects on sleep:

As we start spending more and more time in the passive mode, the time we need to sleep already is shortened.

The less active our mind is, the less energy we’re wasting, and thus we require less sleep in order to renew our energy.

But when the third mode becomes our normal state of consciousness, our total sleep time is reduced further because this state is very similar to deep sleep itself, so it provides rejuvenation comparable to that which deep sleep provides.

As I mentioned above, dreams are the products of our mind which continues being active during sleep. So as the mind becomes less and less active, dreams also become fewer.

But when we go beyond mind altogether, the witnessing itself becomes the focus of our awareness, thus no dreams are created. Unless we create them, much like we can still use our active mind when we’re awake to think if we need to.

The problem with the third state is that it can’t be attained through effort. By maintaining the passive state as much as possible, we can increase the chances of experiencing it, but it’s not up to us.

Fortunately, the passive state in its own is very valuable for sleep as we shall see next.

How can the passive state of mind help us to attain better sleep?

Meditation in general and mindfulness based interventions in particular have made their way into the mainstream sleep science and are already employed in treatment of sleep disorders, such as insomnia.

In the following section I will go over some interesting scientific studies which put meditation and mindfulness to the test for treating sleep disorders.

Before I begin, let me just reiterate that by spending most of our waking time in the active state of mind, we’re tiring ourselves unnecessarily, thereby creating a need for sleep which we can not necessarily accommodate in our busy schedules. So by making our minds more and more passive, we will function better with less sleep.

Conditioning ourselves to be in the passive state means also that we will have less obsessive thoughts, which in many cases are the main cause of sleep problems such as sleeplessness.

Insomnia is the most common sleep disorder. As I describe in my article on insomnia, treatment options for insomnia include using drugs (which never cure the problem and may cause serious side effects) and cognitive behavioral therapy (CBT).

One of the elements of CBT is MBSR (mindfulness-based stress reduction), basically a systematized practice of mindfulness meditation.

How effective is MBSR for insomnia though?

Randomized controlled studies which put this intervention (MBSR, as well as MBTI – mindfulness-based therapy for insomnia) to the test show that it may decrease the time it takes to fall asleep and total wake time as well as increase the total sleep time. With a good patient acceptance and durable results, the researchers conclude that it MBSR and MBTI “can be successfully used for the treatment of insomnia.”

Participants in an MBSR focus group study reported that while the intervention did not make them sleep longer, they were “sleeping better, waking more refreshed, feeling less distressed about insomnia, and better able to cope when it occurred.”

Many people spend much of their day sitting down. To such people, I wouldn’t recommend sitting meditation. Meditation can also be practiced while moving. Indeed, meditative movement was shown to be effective for improving sleep quality in a comprehensive review of randomized controlled trials reporting outcomes of the effects of such meditative movement practices as tai chi, qi gong, and yoga on sleep quality.

Getting better sleep is crucial since poor sleep quality is associated with pain and fatigue among fibromyalgia patients.

There is promising evidence that mindfulness can be used for treatment of FMS and may reduce pain among patients.

Results showed that compared to the control group, individuals in the mindfulness group demonstrated significant improvements across all outcome measures and that the intervention effects were maintained at a 3 month follow-up assessment. The relating to FMS and may thus have a role in the treatment of FMS as well as other pain disorders in which sleep impairment is a central feature of the condition.

Diabetes should not be treated; it can be cured easily with a nutritional intervention.

Until it’s cured though, it may be warranted to reduce the accompanying stress, anxiety, depression, and the sleep problems associated with the disease.

This symptomatic improvement can be achieved with meditation as a recent study showed. Sleep problems in particular lessened as reflected by improved scores on the Pittsburgh Sleep Quality Index.

How can we reach the passive state of mind?

Meditation is the practice which leads to the development of a passive state of mind.

There are many kinds of meditation, which can be roughly divided into two:

In concentration, there’s an effort to focus on one particular object, which may be internal (like a thought or image) or external (like a sensation or the flame of a candle). This is valuable for achieving magical powers, and it can also lead to the third state (in practices such as Raja yoga). However, it works in a different way and will not necessarily help you attain a passive mind.

The meditation which will allow you to develop a passive mind is mindfulness meditation. 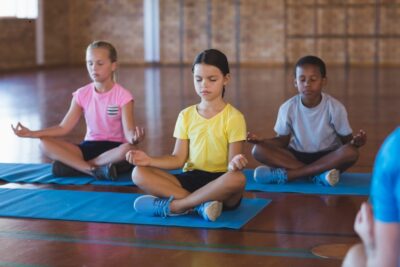 In this type of meditation, you can also use an anchor, something to focus on, but your goal is not to focus on the anchor to the exclusion of all other perceptions, but rather to drop all effort and make your mind passive. So if a sound suddenly grabs your attention, you may hear it, maintaining full awareness. Knowing, “Now I’m hearing a sound.” Then, as soon as possible, simply return to the anchor.

The most common anchor used in mindfulness meditation is awareness of breathing.

You should not change your breath in any way; simply be aware of it.

If the mind drifts to any thoughts, acknowledge that and come back to the anchor.

Do not actively think about anything. Thoughts will arise, and so will sensations, perceptions and emotions, but each time, you just notice the distraction, and return back to your anchor.

It is helpful to practice mindfulness meditation sitting or lying down, at least once or twice per day. But that won’t make your mind passive.

To attain the second state of mind, you will need to generalize the passivity you will start appreciating during your daily meditation sessions to the rest of the day.

So, when you’re eating, make the taste of the food your anchor, and focus only on that.

When you’re walking, use the sensation of the feet touching the ground as your anchor. You should still be mindful of your surroundings, but use the anchor as something stable, constant to return to whenever the mind drifts away and becomes active again.

Whatsoever you’re engaged in, do only that. Give it your full attention.

This process may not be easy for a solitary practitioner. Joining a meditation group or using a mindfulness app such as HeadSpace would be extremely helpful to establish this habit.

As your mind becomes passive during more and more moments throughout the day, your sleep will be affected as well. You will need less sleep since you will be wasting less energy and the passivity will also follow you to when you’re trying to fall asleep at night, and you will experience less thoughts interfering with sleep onset.