Looking to enhance our dreaming experience and chances of attaining lucidity, we often reach out for supplements, trying to boost our dream recall, make our dreams more vivid or adapt our sleep cycles. Who finds himself willing to experiment with melatonin, Alpha-GPC or 5-HTP certainly won’t shy away from this much simpler dream-enhancer you can buy in every self-respecting grocery store. In this article I’ll discuss why you might want to turn to drinking green (or white) tea before bed to increase lucidity. 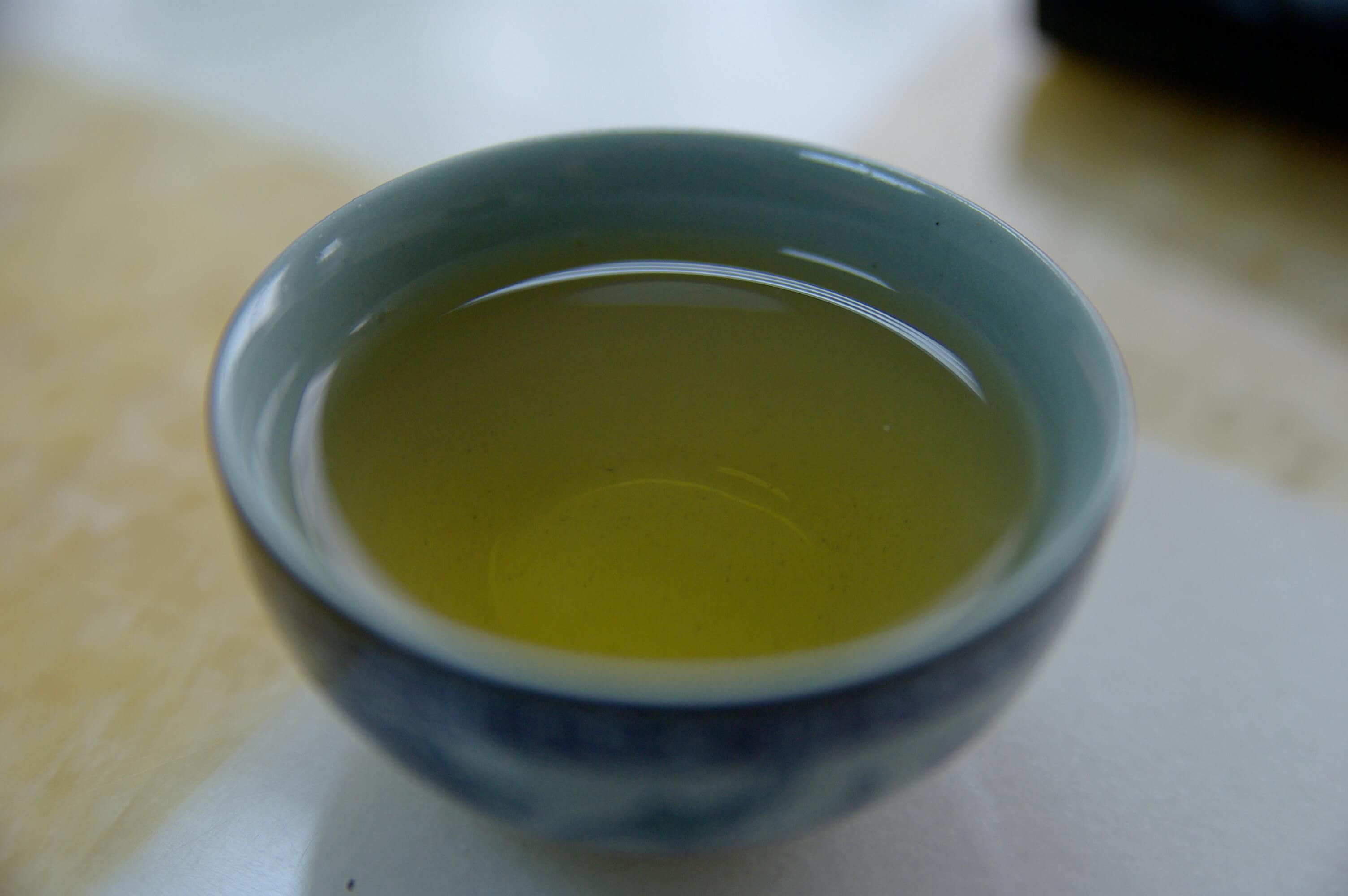 Starting off with the downside, green tea (Camellia sinensis) is known to increase the absorption of calcium, partly due to it containing small amounts of caffeine. Although calcium isn’t necessarily harmful and can in some cases actually help in our search for lucidity, those of us who try to decalcify will want to avoid this. Shortening the time you steep in the tea, however, reduces the amount of caffeine that is released.

Now I’ve covered that, it’s safe to say that despite the presence of caffeine, and ironically partly thanks to the absorption of calcium, green tea actually relaxes you up to the point you fall asleep faster, and get to sleep deeper and longer. Where some people find this makes them sleep too deeply, others benefit from the undisturbed rest and get a better shot at waking up to lucidity.

A great thing green tea contains is l-theanine, an amino acid that is only found in certain trees and does wonders. To begin with, it seems to really improve memory performance, which would help us when working on dream recall. Secondly, l-theanine is believed to help us focus, greatly improving our ability to concentrate. Funnily, there’s reason to believe that when combined with the caffeine, l-theanine increases the latter’s ability to help us concentrate and remember things, and decreases its downsides, being mainly nervousness, sleeplessness and anxiety.

What really makes this an interesting supplement to turn to, is the fact that l-theanine encourages mindfulness, which would on one hand aid when practicing all day awareness and on the other make our dreams more vivid.

If you were wondering why black tea isn’t being promoted as a supplement, it’s because green tea contains much higher levels of l-theanine, which should be even higher in white tea.

On another note, l-theanine is available as a supplement on its own, but drinking green tea should work as well (and won’t cost you as much).

Also available as a supplement, l-glutamine is found in green tea as well. Those who use it separately, much like those using l-theanine, report having very vivid dreams and better dream recall, which probably indicates that l-theanine and l-glutamine go hand in hand and strengthen each other’s effects – making green tea an even more attractive additive.

Choose your tea with care – you want to go for an organic, preferably loose leaf tea made in Japan. (Chinese tea may be contaminated with lead.) If your stomach gets upset easily, try having green tea with jasmine and some honey and don’t go for green lemon tea. Apart from that, any green tea will do.

As mentioned before, shortening the time you grant the tea to infuse should reduce the amount of caffeine that’s released, which could also prevent stomach aches. Sweetening the tea or adding milk shouldn’t affect its effects regarding lucidity.

As to the dose, there exists quite some debate, but like most things that probably is a personal matter. Try experimenting with what suits you best, but as far as I’m concerned drinking green tea throughout the day can’t hurt and actually benefits your health in a number of ways, while it should also increase your chances of becoming lucid even further.

When setting the tea, use about a spoonful of loose tea leaves and put them in a strainer. Boil some water, leave it to cool off for about a minute and then pour it over the leaves (pouring it over while the water is still boiling is said to damage the leaves and interfere with the desired effects).

If drinking tea is not your cup of tea, then you can always eat it. One recipe I love uses only two ingredients: bananas and matcha, powdered green tea leaves.

I gave it a try

I myself am not a natural lucid dreamer, but tried drinking tea right after waking up, throughout the day and just before bed for two weeks. The first two nights I didn’t notice any real differences dream wise, and was asleep faster than I’d normally be, not even remembering any dreams in the morning. I did feel very relaxed throughout the day and found myself more focused and awake, which was very nice on its own. The third night, I had two pretty vivid dreams which I remembered, and this has been the case for the past week and a half. I’m also more capable of recalling the landscapes and buildings that occur in my dreams, which made me realize that I dream up some pretty wicked architecture and landscaping – at the moment I’m trying to use that to wake up to lucidity, but unfortunately it hasn’t come to that either.

To me this proves that drinking green tea on its own won’t make you lucid – but then again, I didn’t expect that. Regardless, I am convinced that it does influence your dreaming as well as your overall health and state of mind during the day, and its worth as a supplement should not be underestimated.

For now, I’ll try experimenting with other natural additives – but green tea has become something I’ll be drinking daily.

Aside from its relaxing and focusing properties, green tea has a lot of other great qualities, some of which may indirectly influence your dream abilities.

On one hand, it is capable of helping you deal with stress, anxiety and even depression. While no cure is the whole solution, facing mental struggles is more manageable when relaxed. And of course a clear, relaxed mind is easier to focus and shape, so that cup of green tea will do you good no matter what.

On the other, green tea is an excellent aid when losing weight. Drinking it right before bed gives your metabolism a push, making you burn fat overnight. It also lessens your appetite and increases the production of hormones responsible for the burning and breaking down of fat. As an extra, it helps you avoid snacking between meals by giving you a sense of satisfaction. This comes in handy when keeping in mind that going to bed on a full stomach mostly results in hazy, nervous dreams – which normally aren’t the ones that lead to lucidity.

On top of that it’s full of epigallocatechin-3-gallate (an antioxidant with amazing antibacterial and anti-inflammatory properties), it improves the immune system, it’s good for your hair and skin, it manages cholesterol levels, it increases oral hygiene and is even said to help fight cancer. We’d say, why not give it a try.

In the search for lucidity, you can come across all sorts of supplements. Not all of us are fond of using chemicals, however, so for those people natural supplements like a simple cup of green tea are a great alternative.

Just like most additives, it will not make you lucid on its own and should be implemented in a bigger scheme in order to serve the desired purpose. So just drinking that cup is not enough – drinking it while flipping through your dream journal, however, may just do the trick.

Next to that, it won’t work for everyone, as some people will find themselves too fast asleep to recall any dreams.

Nonetheless, we’re convinced that drinking green tea – be it before bed, after waking up or throughout the day – is a great idea in almost any case*, and will definitely do more good than harm.

* When you suffer from iron deficiency, anaemia or some form of sensitivity to caffeine, or as a breastfeeding mother, drinking green tea daily probably isn’t the best idea. If these terms don’t apply to you, but you’re still uncertain about taking up this habit, visit a doctor before doing so.