We all know lettuce (Lactuca sativa) as a leaf vegetable used in salads and sandwiches, however other than being a culinary plant, lettuce also has religious and medicinal significance.

Lettuce has mild narcotic properties, and was even known as “sleepwort.” The Yazidi people of northern Iraq even are prohibited from eating the plant.

While the cultivated lettuce has lower levels of the narcotic than wild lettuce (e.g., Lactuca virosa), all species have a white milk-like liquid (latex) in the stems. This narcotic liquid, which is mainly produced during the flowering phase, is called lactucarium or “lettuce opium.”

In fact, lettuce in Latin is Lactuca from the word lac, which means milk.

Lactucarium not only physically resembles opium in that it is excreted as a white fluid, all of the following species have been used as opium substitutes:

Note that all species of lettuce other than Lactuca sativa are referred to as wild lettuce.

The effects of wild lettuce have been compared with those of kava (Piper methysticum) and deadly nightshade (Atropa belladonna). It has mild sedative, analgesic (comparable to those of ibuprofen), and even mild euphoriant properties. It also has cough-suppressing effects.

Lactucarim induces a state of consciousness which has been described as a languid dream state along with an aphrodisiac high.

Lettuce has been used in the USA as a marijuana substitute to induce an identical or similar effect.

Lettuce is a weaker alternative to opium, but it also lacks opium’s side effects, such as digestive upsets and addiction.

In the Afro-American Santeria cult, a sacred liquid known as omiero is drunk during the initiation of a new cult member. Omiero consists of 101 herbs, representing all of the Yoruba gods (orishas). If not all of the 101 herbs can be found, 21 essential ones must be used, which include lettuce (Lactuca virosa). While the psychoactive effect of omiero can be accounted by the cola nuts, rum, and cocoa butter, it is possible that lettuce contribute to the drink’s psychoactivity.

Lettuce leaves and lactucarium were also mixed into witches’ ointments.

What’s in it? Active Ingredients

The sedative and analgesic effects of lettuce are attributed to chemicals known as sesquiterpene lactones (lactucin and lactucopicrin), which occur in the latex.

Lactucin is a bitter tonic substance which acts as an adenosine receptor agonist. Adenosine is a substance which accumulates in the body during waking hours, causing tiredness. The more adensoine is accumulated, the more tired one feels. Caffeine exerts its stimulant effects by antagonising adenosine receptors in the brain. Therefore, lactucin has the opposite effect of caffeine.

Lactucin also has some antimalarial effects as well as cytotoxic and antitumor activities.

Lactucopicrin (also known as intybin) is another bitter substance with sedative, analgesic, and antimalarial effects (in vitro).

While the leaves of lettuce are not active, they do contain opium-like alkaloids such as morphine and hyoscyamine in trace amounts.

In the past, lettuce lozenges, tinctures, and syrups were used as sedatives for irritable cough and as mild hypnotics (sleeping aids) for insomnia.

Lettuce was also used as an anaesthetic and aphrodisiac (though some people report it has anaphrodisiac effects and such it was also regarded in Ancient Greece).

Most commonly, Lactuca virosa was used, but smaller quantities of lactucarium could be extracted from other species as well.

The list of medical conditions in which lettuce was employed include:

An overdose may cause death through cardiac paralysis.

In homeopathy, it is used in the treatment of sleeplessness, chronic catarrh, cough, swollen liver, flatulence, and urinary tract disorders.

As you may have guessed, my interest in lettuce is mainly due to its ability to treat insomnia and promote a good night’s sleep. This has been tested on mice, who under its influence experienced an increase in sleep duration and a decrease in the time it takes to fall asleep. It was also found to protect cells against inflammation and damage resulting from stress during sleep disturbances.

According to a 2018 study which employed a randomized controlled trial and published in the Journal of Ethnopharmacology, lettuce seed decreased insomnia during pregnancy and could be recommended as a safe natural remedy for treatment of pregnancy-related insomnia.

Another study published in 2017 in the Food Science and Biotechnology Journal, found that “lettuce, especially romaine lettuce, is an interesting and cheap source of sleep-potentiating material and antioxidant polyphenols.”

The seed and leaf extracts potentiated pentobarbital-induced sleep. However, the study was done on mice.

A third study from 2013, which was published in the Iranian Journal of Pharmaceutical Research, found that the sleep prolonging effect of lettuce was comparable to that which is induced by the benzodiazepine diazepam (Valium)

Traditional Chinese medicine assigns thermal properties to various herbs and foods. Lettuce is regarded as having a cooling thermal nature, as well as bitter and sweet flavor. It is also recognized as a diuretic and a sedative.

Medicinally, it is used to:

Side effects of eating too much lettuce: Dizziness.

How to Use Lettuce?

It is possible to juice the whole plant and drink it.

The dried latex can also be dissolved in alcohol and drunk. 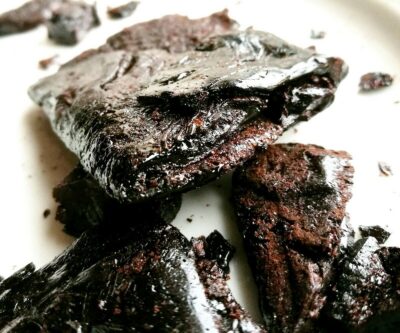 If you wish to smoke lettuce, extract the milk-like substance (latex) from the upper part of the plant, dry it (by exposing it to air), and then smoke it on its own or mixed with other herbs. The whole plant, or just the leaves, even of Lactuca sativa, can be smoked as well.

Soporific sponges have also been prepared with lettuce opium.

Most commonly, wild lettuce (Lactuca virosa) dried leaf is used medicinally in Western herbalism. Long before there was research confirming its effects, it was regarded as a valuable remedy for insomnia and restlessness, especially when accompanied by cough, colic pains, dysmenorrhea, or muscular pains related to rheumatism.

Side effects: Allergy in people sensitive to plants in the Asteracae family.

If using a lactucarium tincture, take 2 ml, 3 times per day.

It is possible to purchase commercial lettuce preparations, however the active bitter principles lactucin and lactucopicrin from the fresh latex were found to be unstable and did not remain in these preparations.

Many people doubt that lettuce opium even slightly resembles opium. Reading user reports can be enlightening, especially when they are reported by people with opium experience, such as the following:

I’ve used many drugs, including opium […] I decided to search for […] opium lettuce. I found some, and picked several plants and returned home with them. I made a tea with about 1.5grams (not exact), and felt very odd, but unsure of the effect. I also scraped some of the milky white substance and allowed it to dry. Later, when I was sure I was feeling completely normal, I smoked it in a homemade pipe. […] soon after taking the few hits available, I felt an unmistakable opium like high. Mild, but definitely there. Euphoria, well being, comfort with myself, enhanced colours. I enjoyed it thoroughly. It even had a sweet taste, somewhat similar to opium. […] It’s not as good as real opium or marijuana, but it’s free and legal, and the stuff grows everywhere.

Another person who had been on prescription opiate pain medication for years reports:

I recently was turned on to Wild Lettuce tincture. […] I pour half the tincture in another bottle, mix it the rest of the way with tonic water containing quinine and shake. I consume anywhere from two to four dropper’s full alone. And I gotta say: “WOW, what an experience!” This stuff really works. Ruling out placebo, I took it during a major withdrawal. Again…WOW!!! I felt mild euphoria, relaxed, even got the same side effects: pinpoint pupils, itchy nose, red face… Also, my knee and back pain became bearable. Yep, just like the real stuff.

Pain is reportedly diminished under the effects of wild lettuce, as one person reported:

I suffer chronic neck pain and have had two surgeries with only minimal success. I’ve been looking for alternatives to prescription drugs and think I may have hit on something. I’ve just finished two cups of tea made with a total of 3 tablespoons of dried plant. I feel very relaxed and the pain is very manageable.

As a sedative, it works well as the following report reveals:

After approximately 5 minutes after ingesting the tea I began to feel very sedate and a little giddy. The effects continued to rise up to about 25 minutes after ingesting the tea. The feeling would be best described in my opinion as similar to Valium. Very sedate and relaxed, soreness from a long road trip in my lower back seemed to vanish. I proceeded to get very tired and slept very well for around 8 hours (at a time much earlier than normal for me). I woke up feeling well rested and no after effects.

A person who suffers from severe sleep problems due to PTSD writes about his experience with lettuce tincture:

It started with the bottles suggested amount of 30 drops but an hour later I decided to take another 30 […] About 40 minutes later I began to feel very zonked and woozy like very relaxing and mellowed out. After another hour I crawled into bed and enjoyed strange but rather pleasurable vivid dreams. I found the deep rem sleep amazing especially because I almost never go into deep sleep.

As for the resemblance to cannabis, one person reported:

I extracted a tar like resin from wild lettuce by steeping the leaves in boiling hot water 3 times, rinsing between steepings. Each steep was 2 hours. Discard the tea from this, soaked the leaves in Isopropyl alcohol in a hot attic for 3 days, evaporated the alcohol in a glass pie pan with a very small fan. What I get from this is a dark green tar that (1/2 a match head size ball) smokes like hash oil and hits the head almost as hard as hash oil.

I made some tea out of it and smoked a badly rolled joint due to the bulky and fiddly stems. The effects took me completely by surprise: rising notes of mild euphoria, a dreamy heady buzz and a complete sense of wellbeing.

Even just smoking the leaves, one person reported that he found “the trip quite enjoyable, I would sum it up as, the same as smoking weed but without the munchies.”

A previous heavy marijuana user wrote about his experience with smoking a fat blunt with at least 2-2.5 grams Lactuca:

about halfway through the blunt started to feel moderately sedated. By the end of the blunt I was definitely what I would call ‘chill’. […] I was in a very nice state. I can relate the feeling to moderate mj buzz, but mostly in the form of a body high. I felt extremely relaxed and moderately euphoric.

If you prefer to vape rather than smoke, you will be happy to read the following experience with a Volcano vaporizer:

I packed up the chamber (4g or so?), set the temperature to it’s highest (9) and proceeded to fill the bag twice, inhaling both bags of vapor in succession. […] 10 minutes later – wow – I’ve actually got a pretty decent buzz! It’s nice. Clear, pleasant, almost within distance of the shores of grinning and pie-eyes. But not that intense, dig? Vaporizing Wild Lettuce in immediate succession seems to be a recipe for success. I’ve got a nice buzz – very much in the head, versus body euphoria – and I’m pleased by the positive results.

Wild lettuce grows in many places, including in North America and Europe.