Vervain (Verbena officinalis) has no known psychoactive effects, however it is used in Medical Herbalism for various purposes, including as a Sleep Herb.

While the majority of Verbena species are native to the Americas and Asia, Verbena officinalis, is native to Europe where it has been held in high esteem since classical antiquity both as a medicinal and divine plant.

Vervain is also known as:

Vervain as a Medicinal Herb

Vervain is a Sleep Herb, which can be used as a moderate strength hypnotic (with a special affinity for the digestive system) and a nervine relaxant.

Medical herbalists also use it as a:

Scientific studies have been able to confirm the anticonvulsant, anxiolytic, and sedative activities of Verbena officinalis, suggesting that some neurological ailments may be treated with it, including epilepsy, anxiety, and insomnia.

In Traditional Chinese Medicine, vervain is known as ma bian cao (“horse whip herb”) and used for amenorrhea, dysmenorrhea, joint soreness and pain, as well as other conditions.

Verbena officinalis contains iridoids, such as:

Verbena as a Magical Herb

The Romans burned vervain as incense along with Laurus nobilis and other herbs. In fact, the word verbena in Ancient Rome was used for any sacrificial herb which was considered very powerful.

In Europe of the Middle Ages and the early modern era, vervain was a renowned magical plant. It had the following uses:

In America, marari, a drink consumed by Brazilian Indian shamans to consult with the spirits, is said to induce a state of excitation, sleeplessness, and pains, for some 24 hours. This may have been a vervain species or a plant often confused with it, lemon verbena (Aloysia citrodora).

As a Dream Herb

Vervain may have been used as a Dream Herb and a sort North American version of Calea zacatechichi.

It is allegedly capable of inducing very long and vivid dreams, even powerful, prophetic dreams.

Verbena, particularly blue vervain, is often used as an aid in astral projection.

An example of a magickal use of vervain would be preventing nightmares by placing “a handful of vervain leaves in your bed, wear them in a mojo bag on a string around your neck, or brew them into a tea and drink it just before bedtime.”

Not many reports are found regarding vervain, possibly reflecting the mildness of its effects.

One person writes after drinking 2 cups of vervain tea with lemon:

I felt relaxed and lightened, similar effects as Damiana tea but much more subtle. 1 hour later and I feel very sleepy and unmotivated which is unusual for me. I went to bed and had some of the most realistic and movie like dreams I’ve ever had. I really enjoyed the effects even if the taste is horrible.

Other reports mention the effects are very soothing but may cause nausea and stomach upset for sensitive people. 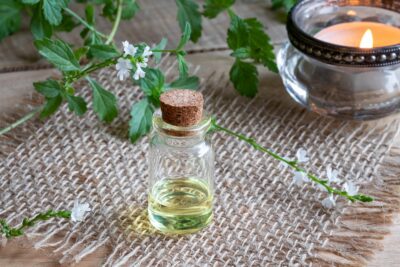 How to Use Vervain?

To make an infusion, pour 1 cup of boiling water over 1-3 teaspoons (2-4 grams) of dried herb (the aerial parts) and infuse in a covered container for 10-15 minutes.

Take up to 3 times per day.

Tinctures can also be used.

In Chinese Medicine a decoction is made from 15-30 grams of the herb.

If taken to effect sleep, take just before going to bed.

Vervain is approved for use as food and appears in the FDA’s list of substances generally recognized as safe. However, manufacturers of dietary supplements do not need to prove the safety and effectiveness of their products. Make sure you choose a USP verified supplement (or whole plant material).

Verbena is well tolerated, but gastrointestinal and allergic reactions have been reported.

It should not to be used during pregnancy and breast-feeding.