Considered the “Seat of the Soul” and the “Third Eye” by many, the pineal gland is beyond any doubt an organ, the importance of which far exceeds anything we currently know about it. Researchers have linked it to the regulation of mood and sleep cycles, but above and beyond that, it may in fact be the very source of dreams and of more intricate phenomena, such as out-of-body experiences and astral projection.

When it comes to pinpointing the origin of dreams and of everything associated with them, science currently tells us that our best bet is a tiny gland, about the size of a rice-bean, located in the center of the brain, which is special in several regards. 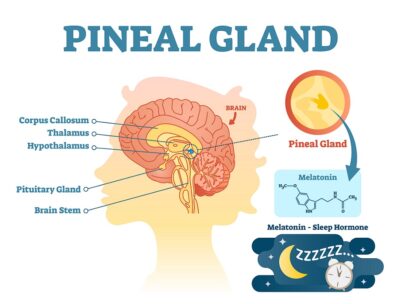 Why is the pineal gland so special though?

From what we currently know for certain, it is responsible for the secretion of melatonin, a hormone that – working hand-in-hand with serotonin, from which it is derived – regulates several bio-rhythms, like the sleep-wake cycle, and it has a hand in the regulation of sexual desire, hunger and thirst as well as the aging process itself.

In addition to these physiological functions, the gland fulfills a number of other roles too, in regards to which science has not yet produced sufficient evidence.

There are reasons why it is called “the gateway to the soul,” the “mind’s eye” and by some, even the “stargate” – a genuine connection between the physical and the metaphysical dimensions.

The Link Between the Pineal Gland and Dreaming/OBEs/Astral Projection

The reason why some researchers suspect that this gland may indeed be the origin of dreams, as well as a series of other – apparently paranormal phenomena – is that it is suspected to secrete – among the already mentioned hormones – a substance called DMT.

DMT is a powerful hallucinogen, and in addition to that, quite possibly the most interesting and intriguing compound found on earth – according to many researchers.

DMT is thought to have a role in the induction of dreams, not to mention more advanced and intricate phenomena, such as astral projection. As a matter of fact, AP as well as other OBEs, are right up the alley of the effects DMT is known to produce in the human mind.

For the time being, this connection is quite tenuous as far as scientific proof is concerned, but there are signs that it may indeed be there.

Is the Pineal Gland Truly the Source of DMT?

Nothing certain is known in this regard yet, but it has been found that the pineal glands of rats do in fact contain DMT.

By analogy, this means the human PG may contain the compound as well.

Researchers, like Dr. Rick Strassman, have set it as their goal to measure naturally produced DMT in the body, and to monitor the levels of the compound under various clinical conditions.

Again: nothing definitive has been achieved in this regard yet, though.

The pineal gland-DMT connection may turn out to be one of the most important scientific findings in the history of humanity, for it may well prove to be the gateway to understanding the true nature of not only the human condition, but of the universe itself.

DMT, the “Spirit Molecule,” is a rather ubiquitous compound in nature, and it has in fact been used by various civilizations since the dawn of time, for religious rituals, due to its hallucinogenic effects.

Short for N,N-Dimethyltryptamine, DMT exerts a series of surprising and extremely impressive effects on the human brain.

DMT trips have been described as genuine forays into parallel dimensions, and those who embarked on these ~20-minute long psychoactive adventures, have reported very intense and realistic hallucinations, including alien abductions.

Indeed, this alien theme seems to be something disturbingly consistent in the reports of Spirit Molecule-trippers world-over, posing the question whether through the substance (or rather, its effects on their brains) those who took it, really gained an insight into another – very real – dimension.

While the isolated DMT compound is considered an illegal Schedule I drug in the US, some research has been done on it, yielding some rather surprising results.

These results seem to point to the fact that a Spirit Molecule trip is much more than a simple drug-induced series of hallucinations…Described as a journey rather than a mere trip, it is said to transport people into a different reality.

If our brain is indeed capable of producing this substance via the pineal gland, then that fact casts a whole new light on the paranormal phenomena reported by people (like alien abductions) as well as dreams and astral projection.

In and of itself, DMT warrants a complete article of its own, maybe even a whole series of articles dealing with this strangest of all psychoactive drugs.

Calcification of the Pineal Gland

The bad news is that this “all-seeing eye” of ours is vulnerable to calcification, which is a process not entirely dissimilar to how our bones are formed.

As such, its triggers are not exactly well-known, despite what some snake-oil salesmen would have you believe.

According to such people, modern lifestyles and diets are to blame for this problem.

The narrative goes that due to the pesticide and fluoride infestation of drinking water and scores of foods, the pineal gland undergoes a gradual calcification, which eventually all but disables this important organ, causing serious disturbances in the lives of those who suffer from such a condition.

Having defined the problem so “eloquently,” the snake-oil peddlers then obviously offer a solution too: the decalcification of the pineal gland calls for a two-pronged approach, meant to deal with detoxification as well as active functional support.

Adopting a lifestyle that promotes the pineal gland is extremely important.

Ditching foods that contain fluoride, discontinuing the use of sunglasses, eliminating processed foods and embracing the light as well as the darkness, while combining everything with meditation, is apparently the way to go.

While none of those recommendations will do a body any harm, some of them are a little unhinged to say the least.

Moreover, there is no scientific evidence concerning the possible benefic effects of any of those “treatments.” Sure, they may aid with overall health and well-being, but the actual science of the pineal gland is a little more convoluted than that.

These all-knowing “PG-specialists” then obviously advise us to start taking actual supplements that “decalcify and actively promote” the function of the PG.

I mentioned above that the true triggers of PG calcification are not well-known, and while this is indeed the case, some of the risk-factors are indeed known. However, they do not seem to be linked to long-term fluoride exposure in any shape or form.

For one thing: the prevalence of pineal gland calcification problems seems directly related to age. To a certain point, the older one is, the more likely he is to encounter such problems.

I said “he” above on purpose, because being a male is apparently another major risk-factor in this regard. Women are much less likely to develop such problems, even with age.

Its presence in the PG is also directly correlated with the presence of Ca (calcium) too, so calcification IS real.

Where the problems come in, is that PG F-concentrations are in no way correlated with bone fluoride concentrations. Bone F concentrations have long been known to be reliable indicators for long-term F-exposure and body burden.

Since no link between Bone F and PG F exists, it is safe to say that PG F is in no way influenced by fluoride exposure and body burden.

It is a process controlled by some kind of other mechanism.

The Most Common Supplements Peddled for Pineal Gland Health

Without the shadow of a doubt, the most popular supplement in this regard is Organic Blue Ice Skate Fish Oil and Activator X.

Skate Liver Oil is said to be a superb compound for the pineal gland, while the Activate X supplement – a combination of vitamins K1 and K2 – is hailed as probably the most powerful PG decalcification agent.

Activate X supposedly removes calcium from the areas of the body where it is not needed (like the pineal gland and the arteries) and it deposits them in the bones and teeth.

Let us take a closer look at that statement though, because quite frankly, it looks a lot like pseudo-science, and it is beyond doubt way too good to be true.

Vitamin K2 is recommended for use with Ca supplementation, because it prevents Ca from being deposited in the arteries, while helping with bone formation.

That’s great news, but as I mentioned above, PG calcification is a process similar to bone formation.

With that in mind, K2 may actually be counterproductive rather than useful.

Activate X is best taken with Vitamin A and Vitamin D3, and skate liver oil, such as the Blue Ice Fermented Skate Liver Oil is very rich in these vitamins and additional nutrients.

It bears mentioning though that all this is nothing more than pseudo-science. As long as the exact mechanism of PG calcification is not deciphered, it could never possibly amount to anything more.

This whole approach is best described as “let’s throw a whole bunch of vitamins/nutrients – that we know work elsewhere for something rather similar – at the matter, and let’s hope something sticks.”

Science and your body do not work that way though.

Another supplement oft-advertised in this regard, which supposedly eliminates unneeded calcium from the body, is iodine.

Again: iodine is indeed needed and it is great for certain issues. PG calcification is likely not one of these issues, but then again it may be…

Raw Apple Cider Vinegar – which is a powerful detoxifier too – may also be included in a PG-supporting diet. It won’t hurt you, when used in proper quantities, but I would not be the least bit surprised if it did not help with PG calcification at all.

Melatonin is yet another option, though I suspect it may be an efficient treatment for the symptoms, rather than the causes of this problem.

Without a doubt, melatonin supplementation can and will have a positive impact on this problem, but it will likely not do much for the calcification issue.

It simply corrects one of its ill-effects.

One can also consider super-foods that are rich in chlorophyll, like spirulina and wheat grass. Raw cocoa and oregano oil are also popular PG supplements.

Whether these can help in any way or not with PG calcification is again anyone’s guess really.

People who sell such supplements are in essence playing a very safe game, since these supplements have been known to elicit benefic effects in other ways, therefore they will likely not hurt you.

In some people, the theories around the pineal gland, DMT, parallel dimensions and dream-enhancement will doubtlessly elicit the fluoride stare.

While actual scientific evidence supporting those theories is as yet scarce, logic seems to foretell the story.

Again: if these connections are indeed scientifically proven, humanity will have just had its biggest moment of revelation. Something of this magnitude cannot be taken lightly…

The treatment of PG calcification is an entirely different story though. What we have here in this regard, supplements-wise, is nothing more than pseudo-science.

The key here is to find the actual causes and mechanisms leading to PG calcification. Until that hurdle is cleared, there’s no point in wasting any breath debating this problem.