Sleep disorders can take a variety of forms. You may indeed have a sleep disorder and not even know it. What you eat has a massive impact on the severity/existence of your sleep disorder. There’s no “magic bullet” in this regard though. It looks like a host of varied nutrients consist of ideal sleep nutrition and are needed for proper sleep. In general, stick to a low-glycemic diet, and try to eat as diversely as possible. Organic, whole plant-based foods are recommended. Keep a close eye (and possibly a diary) on your sleeping and eating habits, to identify the problems.

The fact that what you eat and the quality of your sleep are inter-connected, is obvious to everyone. Who hasn’t experienced a bad night’s sleep due to a spoiled stomach, which in turn resulted from the ingestion of something that did not agree with it? The issues I’m about to discuss in this article reach way above and beyond the obvious though.

Your sleep quality in general is massively influenced (for the better or worse) by what you eat.

Science has progressed by leaps and bounds on this matter lately. The good news is that the role of various macro- and micro nutrients in sleep is now rather well-known. The bad news, on the other hand, is that science still hasn’t managed to come up with a sort of perfect “recipe” that would give people exact recommendations on what they need to eat to sleep well and to be rid of sleep disorders.

In my previous article, I covered the link between the digestive system (gut) and sleep/sleep disorders. As I made it clear there, this link is everything but simple. Above and beyond how food impacts the gut flora though, there’s an equally convoluted nutritional aspect to this equation too.

The problem from the nutritional perspective is that there are complex interdependencies between the various nutrients involved, and thus none of them can be considered on a stand-alone basis.

Let us take a closer look though at some of the facts science has thus far delivered results-wise.

Before we delve into how different sleep disorders are impacted by various nutrients, we need to redraw our understanding of what constitutes a sleep disorder.

As soon as they hear “sleep disorder” people immediately think of insomnia and/or sleep apnea. While both of those conditions are indeed serious sleep disorders, they’re but the tip of the iceberg in this regard.

Anxiety/depression also results in sleep disorders. If you find yourself feeling out-of-the-place drowsy during the daytime – when you should normally be up and about – you also have a sleep disorder. Other such sneaky sleep-related problems include forgetfulness, brain fog, scalloped tongue, cold extremities, sleeping on your stomach and teeth grinding.

Above and beyond these conditions though, nutrition has a link to sleep health (and by extension: overall physical health) as well.

One such obvious link is the one between sleep deprivation and weight issues. This is a two-way street though. We now also know that nutrition impacts sleep quality, sleep architecture (the length of various sleep-phases), the circadian rhythms (which I directly linked to the internal rhythm of the digestive system in my previous article), as well as sleep disorders, such as sleep apnea, hypersomnia and insomnia.

It is interesting that diet has been linked to actual sleep-time length. Decreased variety diet-wise apparently results in both shorter-than normal and longer-than normal sleep times. Alarmingly, the presence of illnesses such as cancer, has been shown to elicit rather similar changes in sleep times.

The most relevant study in this regard is a Women’s Health Initiative one the sample-size of which (some 459 test subjects) makes it very legitimate indeed. The methods used in the said study, as well as the fact that besides total fat, saturated, non-saturated and trans fats were tracked, together with an impressive number of other nutrients, lend it more practical value still.

How do you tackle your sleep apnea through nutrition though?

Interestingly, for solutions to this specific problem, we have to look at the micronutrient category, more specifically at vitamins, where vitamin B, C and E seem to play the biggest roles.

Vitamin B has a positive effect on circadian cycles and sleep in general, but vitamin C delivers concrete benefits to the circulatory system, more precisely to the health of the blood vessels. This is extremely important, since blood vessels bear the brunt of the damage caused by the condition.

Sleep apnea causes a number of vitamin deficiencies too, among which vitamin D and vitamin A problems are the most prominent. It is thought that these deficiencies actively contribute to the cardio-vascular complications often experienced by sleep apnea sufferers.

Selenium is apparently an important micro nutrient too, as far as sleep apnea goes. It works in ways similar to vitamin C, meaning that it too targets oxidative stress. What’s interesting about this mineral is that selenium deficiency is relatively common – and that makes it a nutritional target for sleep apnea sufferers.

Vitamin C sources are plentiful and rather common. Remember: I’m talking about vitamin C absorbed from actual food here and not supplements.

Fruit such as lemons and other citrus, are excellent sources for this vitamin, though it is plentiful in cauliflower and broccoli too. Vitamin A resides in carrots, while vitamin D is generated in the skin as a response to exposure to sunshine.

An interesting addition to an anti-sleep apnea diet would be aronia berries. Containing by far the most anti-oxidants of any fruit, aronia packs a massive punch on this front.

Vitamin B is a good starting point in regards to insomnia as well.

These vitamins, every single one of which has been shown to benefit normal sleeping patterns, as well as mood (and note to lucid dreaming enthusiasts: dream recall too), work in unison, in a complementary manner.

Food-wise, such vitamins can be sourced from a variety of whole grains, such as brown rice. Beans and legumes are a great source too. Seeds, nuts, dark, leafy vegetables and fruits are also good vitamin B complex sources.

It has been found that those who suffer from insomnia tend to consume less vitamin B complex-containing foods than people who are not plagued by such problems.

Magnesium and zinc are also interesting micronutrients in regards to insomnia. While in certain combinations, they may have a significant direct effect on sleep too, they positively impact ailments such as restless leg syndrome, which are known to trigger and feed insomnia.

Combining the two minerals with melatonin will apparently improve the quality of sleep too, especially in insomnia-sufferers.

With anti-insomnia nutrition, we’re entering the realm of macronutrients too, more specifically, that of fats. Ketogenic (high-fat) diets have been associated with a number of surprising benefits, and one such benefit is an improvement in regards to insomnia. Such diets increase REM sleep duration, they deepen slow-wave sleep and they have a positive impact on mood too.

This micronutrient tends to be deficient in insomnia-sufferers, and its mechanism of action makes perfect scientific sense too. Oleic acid is synthesized into oleamide, a compound which is known to regulate sleep.

One problem faced by insomniacs is the difficulty to fall asleep. The problem can indeed be quite aggravating, even to those who do not otherwise have problems maintaining sleep.

Interestingly, this part of the complex sleep equation as well as the length of the sleep time can be modulated through macronutrients, such as protein and carbohydrates.

According to the above mentioned Women’s Health Initiative study, increased protein intake positively impacts the whole sleep experience. It makes it easier to fall asleep, it expands restorative sleep and it maintains sleep. With that in mind, a more protein-focused diet is definitely an avenue to explore for insomniacs as well as for all those suffering from any type of sleep disorder. 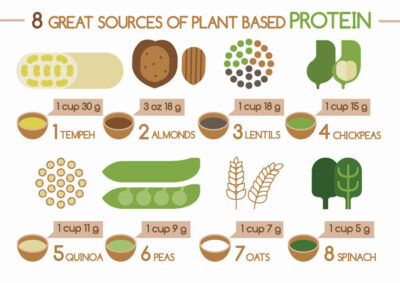 The really good news in this regard is that scientists have actually come up with a number concerning ideal protein intake in relation to sleep. It has been found that 20% of one’s total calorie intake is ideal in regards to protein consumption. What this also means is that anything above that number no longer adds further sleep-related benefits.

Carbohydrate intake – more precisely the intake of complex carbohydrates – has been shown to provide similar benefits, namely: it promotes the maintaining of sleep as well as an easier transition into the land of the sandman.

How to address daytime sleepiness

This is a problem for many people. Fortunately, there are dietary/nutritional options available to fight this sleep disorder, which are a great option for people who do not want to resort to using wake-inducing medications.

Vitamin B1 specifically has been shown to increase daytime alertness on one hand, while obviously decreasing daytime sleep. On the whole, this vitamin has been proven to positively impact sleeping patterns.

When we are talking about the optimization of sleeping time, we’re not necessarily exploring ways to increase this variable. Too much sleep is not benefic either and it can be a sign of an underlying problem.

Plant isoflavones represent an interesting solution in this regard, one that is certainly worth exploring . Phytoestrogens are thought to be great modulators of sleep duration and quality. It goes without saying that to lock in the benefits offered by these isoflavones, one should consume as diverse a range of vegetables as possible.

Also known as the “darkness hormone,” melatonin is a hormone used by the body to trigger the onset of winding down and eventually going to sleep. As such, melatonin is indeed a very viable path towards the treatment of various sleep disorders.

While there are scores of melatonin supplements available out there (some of rather dubious quality), we are obviously talking about melatonin-containing and melatonin-promoting foods here.

In this regard, pistachio takes the cake hands-down. A single pistachio nut contains enough melatonin to match the contents of most pill-delivered melatonin supplements.

Strawberries, olive oil, walnuts and even wine can be included here (with a word of caution on the alcohol – which is entirely undesirable in sleep-related issues). The best part of getting your melatonin from actual food is that you won’t risk side effects this way (and some of these side-effects can indeed be rather serious).

To properly synthesize the complex compounds delivered through the above said foods into melatonin, a whole menagerie of precursors, enzymes and other co-factors are required.

Knowing what to ingest to address your sleep related problems is no more important than to know what to avoid.

While – as discussed above – complex carbohydrates do indeed offer sleep-related benefits, the same does not go for their simpler brethren. A high-glycemic diet (a diet rich in sugar) has been associated with a host of negative effects, such as increased daytime sleepiness, fatigue, disturbance of mood, and the downright disruption of healthy sleeping patterns.

Sugar (and alcohol) may expedite the onset of sleep, but this effect comes with a delayed component. Blood sugar will inevitable spike in the beginning, but a few hours later, as it falls through the floor, it triggers norepinephrine, a neurotransmitter which promotes alertness, and which will wake up the sufferer, sending him/her in search of food.

In regards to sleep, sugar and alcohol aren’t really different at all.

Steering clear of sugar and various taste-enhancing chemicals, while sticking to an organic, whole, plant-based and diverse diet seems to be the best way to go about tackling sleep issues through nutrition.

Remember that there is no silver bullet to this approach. What you need is a finely tuned, complex system, with countless components working in unison.

While some of the above discussed compounds/nutrients may seem more important in relation to sleep than other parts of a diverse diet, that image is most likely a false one.