Sleep apnea – unlike some of the sleep disorders I’ve covered here – is a very serious condition, one that may indeed result in the death of the sufferer.

What exactly causes sleep apnea though, how can it be treated, and ultimately: how can you get rid of it?

What qualifies as sleep apnea?

Sleep apnea is very clearly defined, and as such, it can be quite definitively identified by specialists. In theory, any in-sleep incident which sees the “victim” stop breathing for 10 seconds or more is a sleep apnea event.

During such an event, the amount of oxygen reaching the brain and organs of the sufferer is obviously reduced.

With sleep apnea, incidents of the above described nature occur several times per hour. Depending on the frequency and length of these apnea events, several levels of gravity have been defined.

Those who experience 5-14 episodes of breathing stoppage per hour, suffer from a mild version of the condition.

Those limits are indeed very broad, and the symptoms associated with the condition are quite generic and inconspicuous as well. They include drowsiness during activities which require a reduced amount of attention, such as watching television and reading.

With moderate apnea, sufferers will run out of breath 15-29 times per hour, and if that seems like a lot, it’s because it certainly is. Such a frequency means having a sleep apnea event once every two minutes, on average.

The symptoms of a condition this severe include drowsiness during activities requiring a heightened state of alertness, such as concerts and meetings.

Severe sleep apnea is associated with breathing problems of a rather appalling frequency: those suffering from this kind of sleep apnea will experience breathing issues more than 30 times every hour.

Also, such victims will fall asleep during activities that require a massive amount of attention, such as eating, walking, and perhaps worst of all: driving.

In children, slightly different guidelines are used for the definition of sleep apnea.

What are the warning signs of sleep apnea?

While I’ve already covered some of the symptoms of sleep apnea above, that was just me scratching the surface ever so gently in this regard.

The symptoms of sleep apnea are numerous and they cover a wide range of issues, from snoring, to daytime exhaustion.

Indeed, while snoring can be a major sign of sleep apnea, not all snoring is indicative of the problem: snoring followed by choking and gasping noises, or lengthy pauses in breathing, most definitely is though.

Those suffering from sleep apnea will also find that their sleep is not refreshing and that they have headaches in the morning. These headaches are caused by the oxygen-deprivation of the brain.

Other sleep apnea symptoms are memory loss, irritability, decreased libido, having to hit the bathroom several times a night and insomnia – quite a foul collection of sleep-related pathologies.

If by warning signs, you mean risk factors, I can fill you in on these as well.

Being overweight always exposes you to sleep apnea. So does simply being a man, especially middle-aged at that…While women too get sleep apnea, the problem is much more prevalent in the male population.

Large neck-size is yet another risk factor, as is hypertension and a family history of sleep apnea. 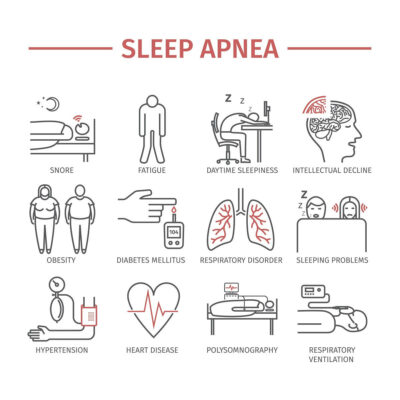 Can you have sleep apnea at a young age?

Diagnosing sleep apnea in atypical sufferers such as teenagers and women is often more difficult than doctors will admit, and indeed those who fall outside the “middle aged, overweight man” category are often misdiagnosed with this condition.

Though most prevalent in the above mentioned category, sleep apnea can be present in just about any age group and that includes children.

While snoring is relatively widespread among the youth too, only a minute percentage of children actually have sleep apnea (some 2-3%). In most such cases, enlarged glands, such as adenoids and tonsils are the guilty party.

Making proper diagnosis even more challenging for doctors is the fact that while in adults, the correlation between obesity and sleep apnea is quite obvious, in children, no such correlation was found.

Apparently, the above said correlation begins showing at the age of 12, above which it becomes more and more pronounced as the years are added.

Childhood sleep apnea often does not even have to be treated. Some children will simply outgrow the condition, as the muscular structure of their throats changes and develops.

In the cases where infected tonsils or adenoids are to blame, tonsillectomy is considered an effective treatment, which has been found to solve some 80-90% of the cases.

Can you die if you have sleep apnea?

The death risks associated with sleep apnea are indeed rather numerous and unsettling.

While dying from an actual episode of in-sleep breath obstruction is not highly likely, the “reach” of this illness extends far above and beyond direct risks. It has been linked to diabetes, pregnancy complications and heart disease, not to mention driving events, which are indeed all potentially deadly.

Although one would think that proving the link between deadly car crashes and sleep apnea wouldn’t need an actual study, such studies were indeed conducted, and their findings are indisputable.

Exactly how much more prone is a sleep apnea sufferer to cause an accident?

Apparently, that number is threefold the risk of a non-suffering driver. Still more unsettling is the fact that the actual gravity of the condition plays no role in this regard. Even drivers with mild sleep apnea are three times more likely to cause car crashes than their healthy peers.

I can also tell you that sleep apnea is linked to diabetes, in a sort of directly proportional manner: the more severe one’s sleep apnea, the more likely he/she is to develop diabetes.

The pregnancy complications angle is quite self-explanatory, but it too extends beyond the direct problems caused by oxygen deprivation.

Can you get rid of sleep apnea?

Fortunately, the answer to that is yes.

As said above, in the case of the childhood version of the condition, sometimes not much has to be done about it: the sufferer will simply outgrow it.

With adults though, the problem calls for a different approach.

Putting forth a path to recovery is little more than common sense in this case too though.

Weight loss and lifestyle change is the obvious first step. The two go hand-in-hand, though obviously, this approach is only valid for those who are overweight/obese. The link between sleep apnea and being overweight has been clearly established, there are no questions at all in this regard. I can personally attest to the fact that weight loss will indeed “cure” sleep apnea, while delivering a host of other benefits to the overall health of the sufferer.

Despite being very effective indeed, weight loss can be difficult for most people to achieve. Therefore, CPAP (continuous positive airways pressure) should also be considered a front line treatment.

CPAP devices have to be worn over the face, and they can be quite clunky and uncomfortable. They blow air into the airways of the sleep apnea sufferer, to make sure that the oxygen supply is never cut short.

Because around half of those treated fail to stick to using the apparatus, alternative treatments, such as the use of an oral device, have been developed.

How serious is sleep apnea?

As I already stated several times above, sleep apnea is indeed a very serious condition.

It can trigger a number of other problems and health issues, some of which can in fact be fatal.

People suffering from OSA (Obstructive Sleep Apnea) are at a higher risk of developing high blood pressure and heart disease.

While this alone seems serious enough, there are other “blessings” included in the sleep apnea package too. Type 2 diabetes is another such issue, together with acid reflux and adult asthma.

In some cases: yes.

Tonsillectomy and adenoidectomy are considered as treatment options, especially with sufferers whose OSA is thought to be triggered by the inflammation of these glands. As such, removing the tonsils is mainly a treatment path for childhood sleep apnea, though in some cases, it may help in adults too.

What is important to know is that this treatment path involves surgery. As far as efficiency goes, OSA symptoms nearly always improve within 6 months following surgery.

What is the most effective treatment for sleep apnea?

Weight loss and a proper lifestyle change is the best way to treat OSA without intrusive intervention. Due to the nature of this approach though, this solution is obviously not feasible for all sufferers.

The currently accepted best course of OSA treatment leads through CPAP – there is no way around that. In addition to effectively treating sleep apnea, CPAP machines also eliminate snoring and the problems associated with it.

In addition to CPAP, oral appliances deserve a second look as well. They present a series of advantages over CPAP machines, which make them much easier to incorporate into the lifestyle of the sufferer.

In this respect, I have to caution against various over-the-counter appliances, which are not FDA-approved, and the effectiveness of which can therefore not be properly assessed.

UAS (Upper Airway Stimulation) therapy is yet another option to consider. It is a clinically proven therapy, which is aimed at people unable to resort to CPAP. The UAS system is a rather intricate one. It electronically monitors one’s breathing pattern during sleep, sending stimulating impulses to the right muscle groups when/if called for.

Nasal decongestives and positional therapy are also treatment options that can bring relief to some.